I know, I know...I should be ashamed of myself! I'm slacking. My sincere apologies. I posted pics of my Elvis Impersonators on Facebook a while back and didn't quite get to the part about blogging about it yet. Life has been pretty hectic and crazy lately. But who's isn't...so for the much awaited recipe (I wasn't sure I wanted to share - it is an old family recipe, one of my secret weapons).

So my 'Elusive Doll' (Skye) was in Seattle early in January and had an Elvis cupcake. When she came home she was telling me about it..."It was good, but Mom, you should use your Banana Bread recipe!" My husband was skeptical. Don't get me wrong...everyone LOVES my Banana Bread, but in cupcakes? So I did a little research and decided to give my version of Elvis Cupcakes a go! First of all, mine are called Impersonators because there is no bacon. I think true Elvis cupcakes should have bacon, but that's just my opinion. These are my family's favorite cupcakes so far. Funny thing...Skye hasn't gotten to try one yet! 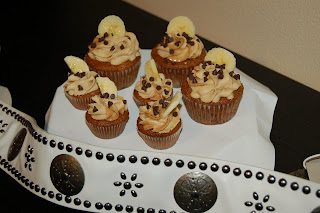 Directions
Preheat the oven to 350 degrees F. Line cupcake pans with paper liners.
In the bowl of an electric mixer fitted with a paddle attachment, cream the oil and sugar on high speed until light and fluffy, approximately 5 minutes. Lower the speed to medium, add the eggs, 1 at a time, then add the vanilla and mashed banana, mix well. In another bowl add the flour, baking soda, and salt. On low speed, add the buttermilk and the flour mixture alternately in thirds to the mixer bowl, beginning with the buttermilk mixture and ending with the flour mixture. Mix only until blended. Scrape the sides of the bowl with a rubber spatula to be sure it's completely blended.
Divide the batter among the cupcake pans (1 rounded standard ice cream scoop per cup is the right amount). Bake in the middle of the oven for 20 to 25 minutes, until a toothpick comes out clean. Cool for 10 minutes, remove from the pans, and allow to cool completely before frosting.
Frost each cupcake with Peanut ButterCream Frosting and sprinkle with mini chocolate chips. Top with sliced banana, if desired.

Place the peanut butter and butter in the bowl of an electric mixer fitted with a paddle attachment. Mix on medium-low speed until creamy, scraping down the bowl with a rubber spatula as you work. Add the powdered sugar and heavy cream and beat on high speed until the mixture is light and smooth. 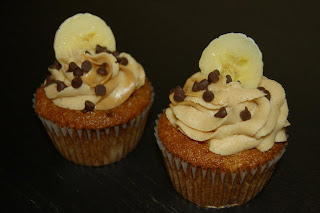 Hope your family loves these as much as mine does!

Momma Doll
Posted by The Wanderlust Dolls at 8:50 PM