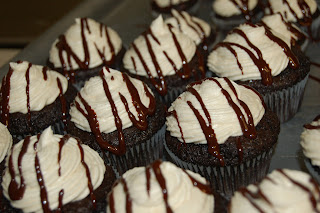 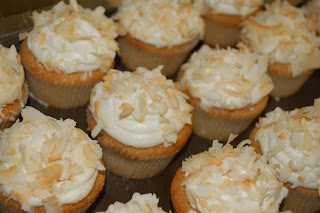 Next month, after some debate, I've decided to change out a couple cupcakes. I had intended on making Creme Brulee cupcakes, but after doing a test batch, decided against it. Don't get me wrong...they were amazing & wonderful, but as with actual Creme Brulee, you need to crystalize the sugar on the top. Well, that works too - except that they need to be served right away or the sugar gets soft and gushy from the frosting. Oh well. They were good tho.

My next selection was a Pound Cake with Whipped Cream Frosting with chunks of fresh strawberries in it. How good does that sound? Fresh and spring like...but the cupcakes have to bake for an hour. If I already had my commercial kitchen built and could just do it from 'home' and not worry about the time requirements I might have done it. I'm still planning on putting into the menu - but later when I get the kitchen done.

So for April I settled on Triple Lemon (Lemon cake, Lemon Curd, and Lemon Cream Cheese Frosting) - did that make your jaw tense and mouth water? Haha..it does mine! And my other cupcake will be Carrot Cake (the moistest cake ever, with fresh shredded carrots and chopped pineapple, a few 'secret' ingredients and Vanilla Bean Cream Cheese Frosting).

Stay tuned for pics and updates on An American Cupcake In Paris!! (I saw the website getting worked on last night!!! I'm so excited!)

Posted by The Wanderlust Dolls at 9:53 AM